This page shows from the ground up how to create a Meson build definition for a simple project. Then we expand it to use external dependencies to show how easily they can be integrated into your project.

This tutorial has been written mostly for Linux usage. It assumes that you have GTK development libraries available on the system. On Debian-derived systems such as Ubuntu they can be installed with the following command:

It is possible to build the GUI application on other platforms, such as Windows and macOS, but you need to install the needed dependencies.

Let's start with the most basic of programs, the classic hello example. First we create a file main.c which holds the source. It looks like this.

Then we create a Meson build description and put it in a file called meson.build in the same directory. Its contents are the following.

That is all. Note that unlike Autotools you do not need to add any source headers to the list of sources.

We are now ready to build our application. First we need to initialize the build by going into the source directory and issuing the following commands.

When Meson is run it prints the following output.

Now we are ready to build our code.

If your Meson version is newer than 0.55.0, you can use the new backend-agnostic build command:

For the rest of this document we are going to use the latter form.

Once the executable is built we can run it.

This produces the expected output.

Just printing text is a bit old fashioned. Let's update our program to create a graphical window instead. We'll use the GTK+ widget toolkit. First we edit the main file to use GTK+. The new version looks like this.

Then we edit the Meson file, instructing it to find and use the GTK+ libraries.

If your app needs to use multiple libraries, you need to use separate dependency() calls for each, like so:

We don't need it for the current example.

Now we are ready to build. The thing to notice is that we do not need to recreate our build directory, run any sort of magical commands or the like. Instead we just type the exact same command as if we were rebuilding our code without any build system changes.

Once you have set up your build directory the first time, you don't ever need to run the meson command again. You always just run meson compile. Meson will automatically detect when you have done changes to build definitions and will take care of everything so users don't have to care. In this case the following output is produced.

Note how Meson noticed that the build definition has changed and reran itself automatically. The program is now ready to be run:

This creates the following GUI application. 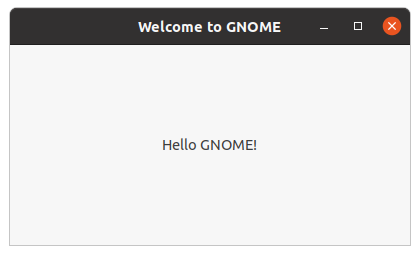