This page shows from the ground up how to define and build an SDL2 gui application using nothing but Meson. The document is written for Windows, as it is the most complex platform, but the same basic ideas should work on Linux and macOS as well.

The sample application is written in plain C as SDL 2 is also written in C. If you prefer C++ instead, the conversion is fairly simple and is left as an exercise to the reader.

This document assumes that you have already installed both Visual Studio and Meson.

Set up the build directory

First you need to create an empty directory for all your stuff. The Visual Studio toolchain is a bit unusual in that it requires you to run your builds from a specific shell. This can be found by opening the application menu and then choosing Visual Studio <year> -> x86_64 native tools command prompt.

It will put you in a weird directory, so you need to go to your home directory:

Typically you'd type cd \users\ and then press the tabulator key to make the shell autocomplete the username. Once that is done you can create the directory.

Now we need to create a source file and a Meson build definition file. We're not going to use SDL at all, but instead start with a simple program that only prints some text. Once we have it working we can extend it to do graphics. The source goes into a file sdlprog.c and has the following contents:

The build definition goes to a file called meson.build and looks like this:

With this done we can start the build with the following command:

Here builddir is the build directory, everything that is generated during the build is put in that directory. When run, it should look like this. 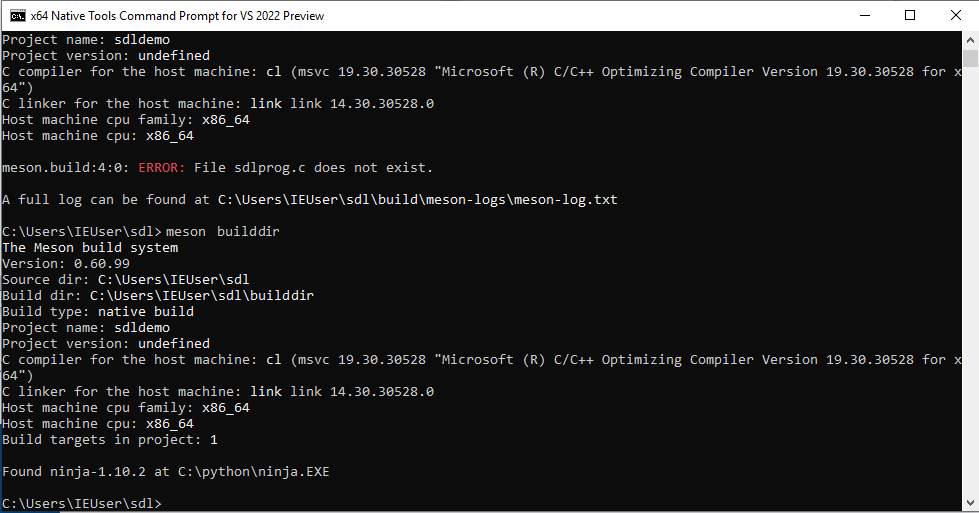 The program is compiled with this:

The -C argument tells Meson where the configured build directory is.

The program will be in the build directory and can be run like this: 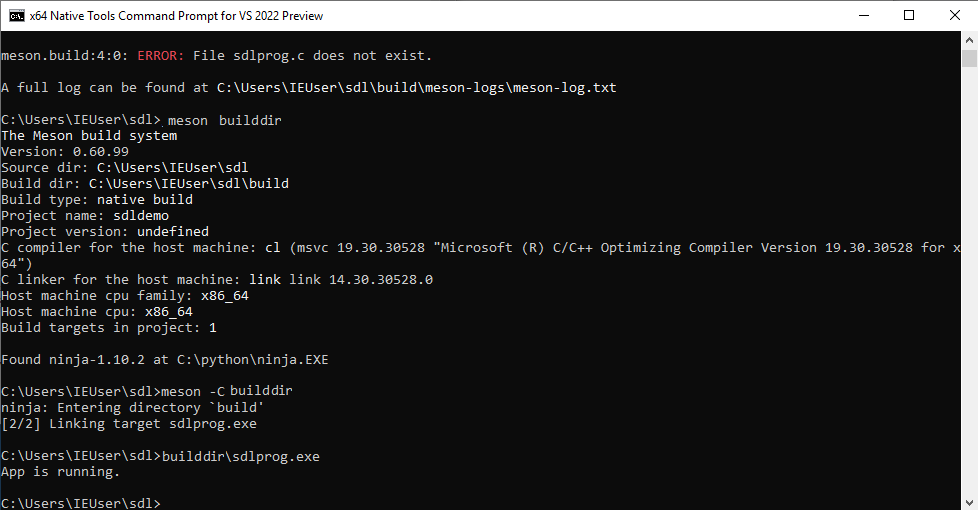 Upgrading the program to use SDL

The code needed to start SDL is a bit more complicated and we're not going to go into how it works. Merely replace the contents of sdlprog.c with the following: 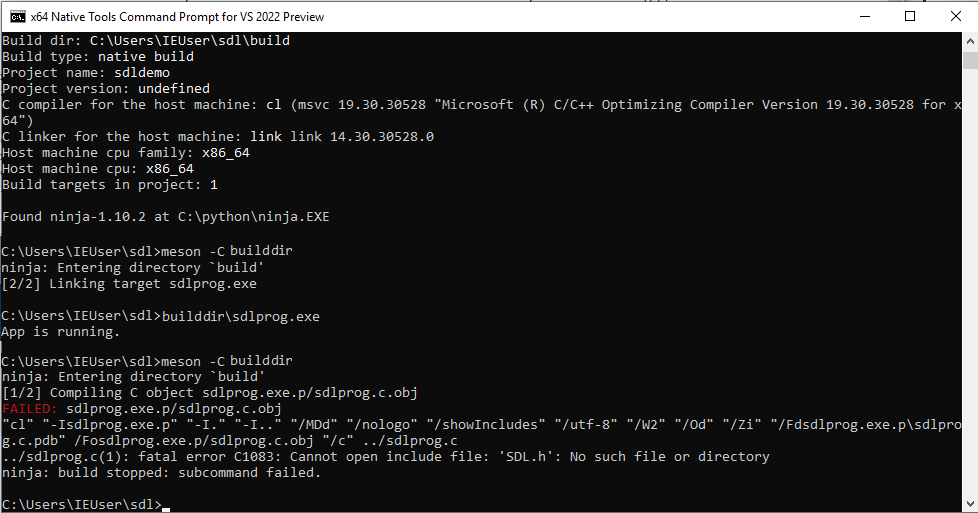 That fails. The reason for this is that we don't actually have SDL currently available. We need to obtain it somehow. In more technical terms SDL2 is an external dependency and obtaining it is called dependency resolution.

Meson has a web service for downloading and building (if needed) dependencies called a WrapDB. It provides SDL2 so we can use it directly. First we need to create a subprojects directory because in Meson all subprojects like these must be stored in that directory for consistency.

Then we can install the dependency:

As a final step we need to update our build definition file to use the newly obtained dependency.

In addition to the dependency this has a few other changes. First we specify that we want to build helper libraries statically. For simple projects like these it makes things simpler. We also need to tell Meson that the program we are building is a Windows GUI application rather than a console application.

This is all we need to do and can now run meson compile again. First the system downloads and configures SDL2: 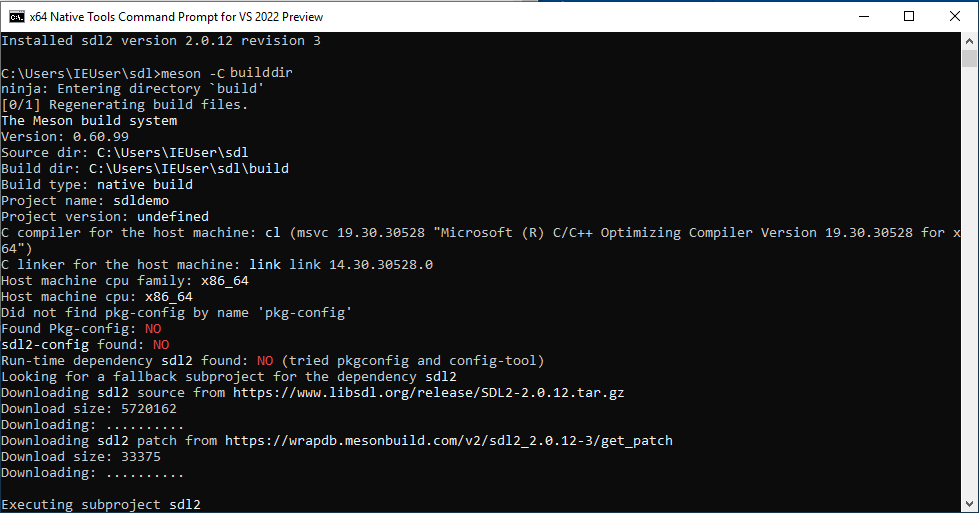 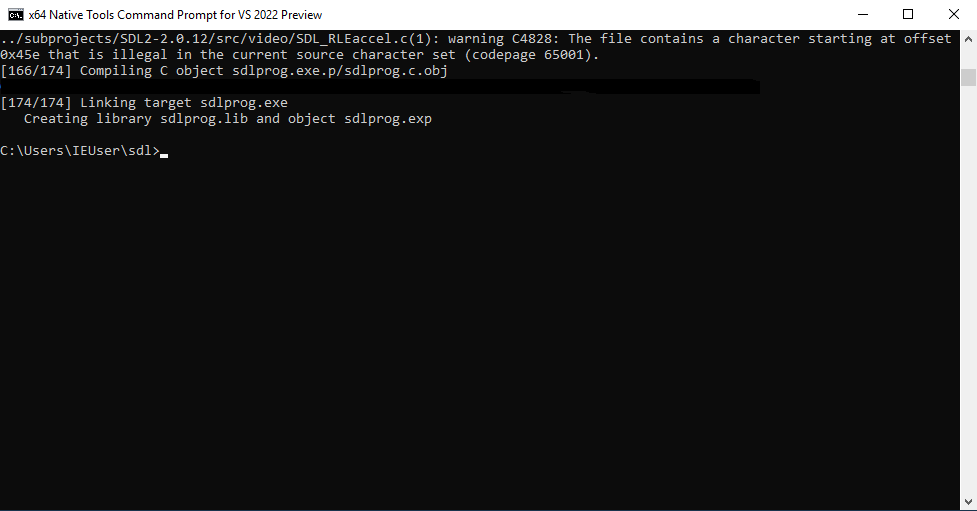 Now we can run the application with

The end result is a black SDL window. 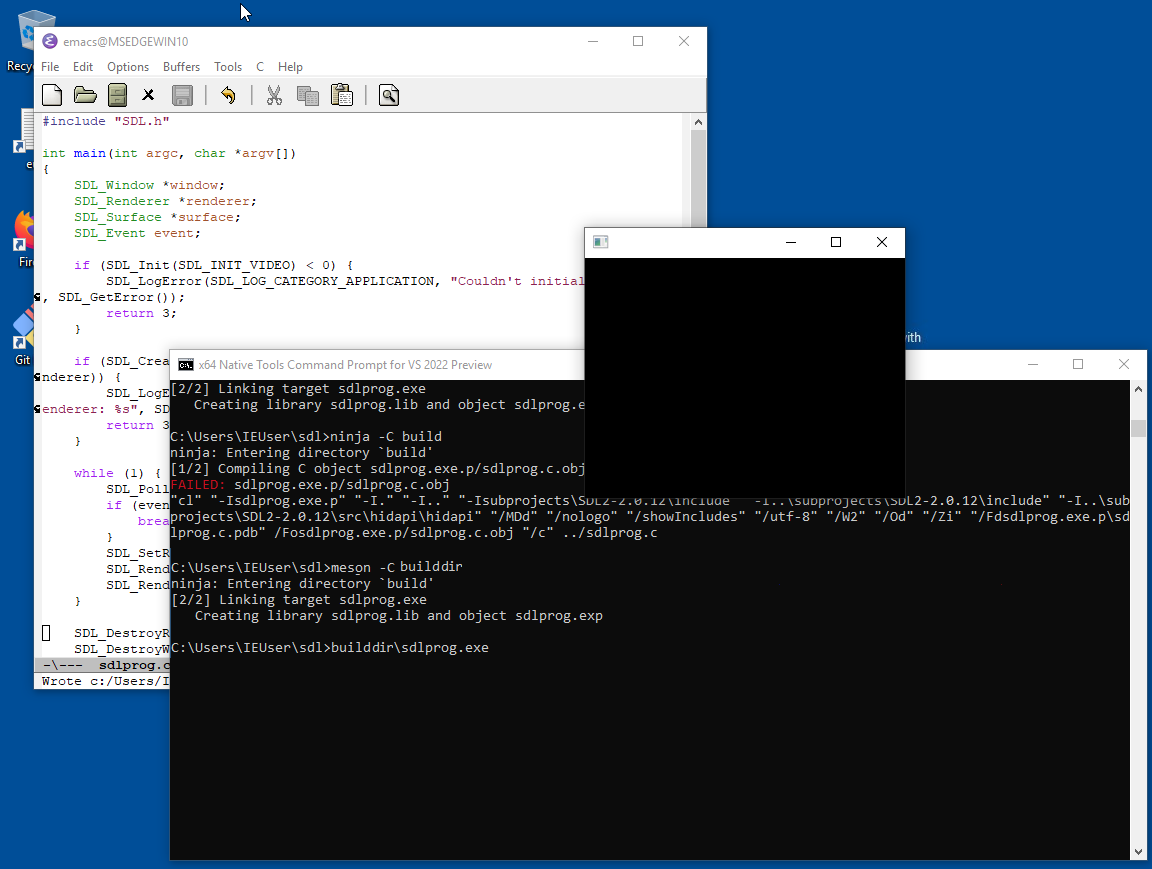