Performance differences in build systems become more apparent on slower platforms. To examine this difference we compared the performance of Meson with GNU Autotools. We took the GLib software project and rewrote its build setup with Meson. GLib was chosen because it is a relatively large C code base which requires lots of low level configuration.

The Meson version of the build system is not fully equivalent to the original Autotools one. It does not do all the same configuration steps and does not build all the same targets. The biggest missing piece being internationalisation support with Gettext. However it does configure the system enough to build all C source and run all unit tests.

All measurements were done on a Nexus 4 smart phone running the latest Ubuntu touch image (updated on September 9th 2013).

The first thing we measured was the time it took to run the configure step. 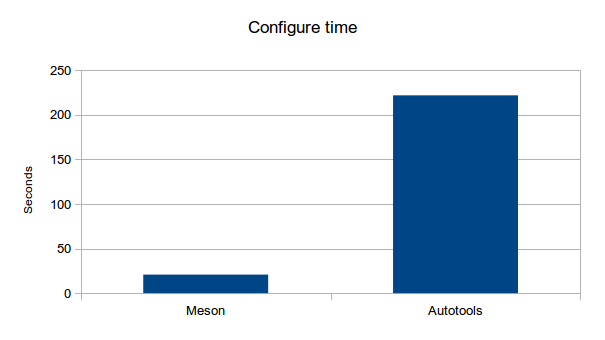 Meson takes roughly 20 seconds whereas Autotools takes 220. This is a difference of one order of magnitude. Autotools' time contains both autogen and configure. Again it should be remembered that Meson does not do all the configure steps that Autotools does. It does do about 90% of them and it takes just 10% of the time to do it.

Then we measured the build times. Two parallel compilation processes were used for both systems. 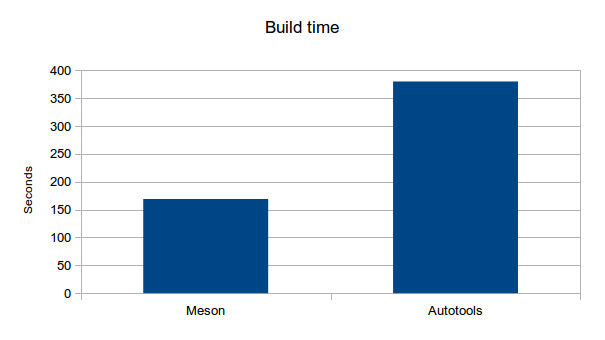 On desktop machines Ninja based build systems are 10-20% faster than Make based ones. On this platform the difference grows to 50%. The difference is probably caused by Make's inefficient disk access patterns. Ninja is better at keeping both cores running all the time which yields impressive performance improvements. 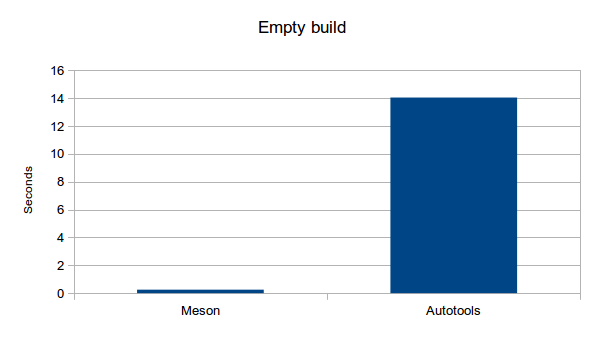 Next we measured the "empty build" case. That is, how long does it take for the build system to detect that no changes need to be made. This is one of the most important metrics of build systems because it places a hard limit on how fast you can iterate on your code. Autotools takes 14 seconds to determine that no work needs to be done. Meson (or, rather, Ninja) takes just one quarter of a second. 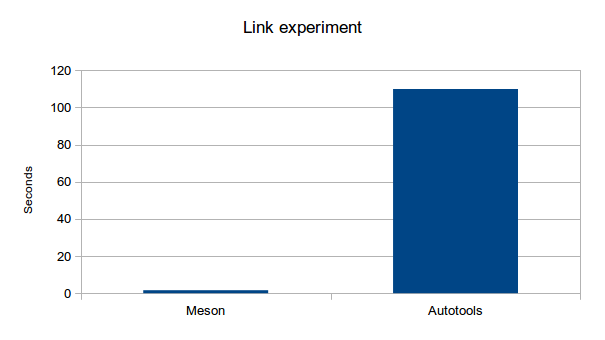 One step which takes quite a lot of time is linking. A common case is that you are working on a library and there are tens of small test executables that link to it. Even if the compilation step would be fast, relinking all of the test executables takes time. It is common for people to manually compile only one test application with a command such as make sometest rather than rebuild everything.

Meson has an optimization for this case. Whenever a library is rebuilt, Meson inspects the ABI it exports. If it has not changed, Meson will skip all relinking steps as unnecessary. The difference this makes can be clearly seen in the chart above. In that test the source was fully built, then the file glib/gbytes.c was touched to force the rebuild of the base glib shared library. As can be seen, Autotools then relinks all test executables that link with glib. Since Meson can detect that the ABI is the same it can skip those steps. The end result being that Meson is almost one hundred times faster on this very common use case.

One of the main drawbacks of C and C++ compared to languages such as Java are long compilation times. However at least some of the blame can be found in the build tools used rather than the languages themselves or their compilers. Choosing proper tools can bring C and C++ compilation very close to instantaneous rebuilds. This has a direct impact on programmer productivity.